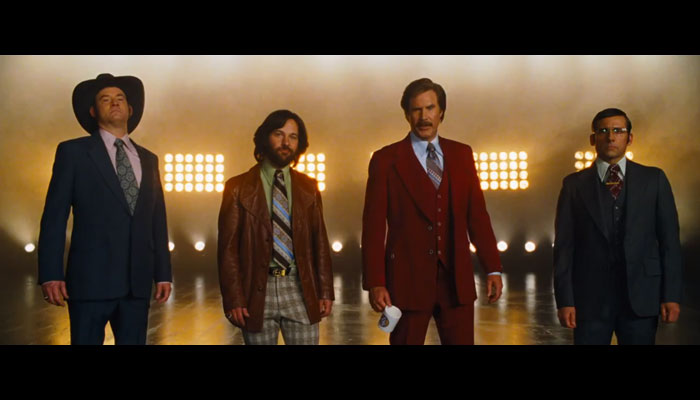 These guys are cooler than school.

I didn’t necessarily think there would be a sequel to Anchorman. It was a fun film, but it was also wildly inappropriate. You see movies in a different light when you watch them with your parents (Office Space was another one like that; I watched that with my grandparents of all things).

Some of you know what I mean, some of you don’t (if your parents are religious or conservative, you should). Either way, over time, I have come to appreciate the original film a little more.

For some reason, it just didn’t click for me the first time around. I didn’t understand why there was a massive street fight in the middle of the movie, or why guys were getting set on fire, or why newscasters were getting impaled with a javelin or having their arms chopped off. Add to that the awkwardly chauvinist Ron Burgundy (Will Farrell), an impossible romance with Veronica Corningstone (Christina Applegate), and you have one really weird and somewhat confusing movie.

That isn’t to say that there weren’t some funny moments, however. The fact that Burgundy reads everything off of the teleprompter screen verbatim definitely makes for comedic gold, though I must point out the similarities to Steve Carell’s character in Bruce Almighty (albeit different circumstances).

By the way, I’m not dumb; I’m just coming clean with you before I give my opinion on this Anchorman sequel.

So, you probably thought that I hated Anchorman 2: The Legend Continues. You’re wrong.

I’ve since come to terms with the original. I get it now. I’m also a fan of Will Farrell, Steve Carell and Christina Applegate, so that doesn’t hurt matters either.

What Anchorman 2: The Legend Continues got right that so many sequels tend to get wrong is that it really, actually built off of the first movie. It took some of the best parts and expanded on them.

For example, Brick Tamland (Steve Carell), Brian Fantana (Paul Rudd), and Champ Kind (David Koechner) all get their much-needed moments in the spotlight. Brick was a hilarious character that didn’t get near enough time in the first movie, and The Legend Continues rectifies that. However, Hollywood does seem to be out to prove that quirky attracts quirky, as Brick finds his female counterpart in Chani Lastnamé (Kristen Wiig). Yes, she’s exactly like Brick. Dare I point out the similarities to Garth in Wayne’s World 2?

Additionally, Anchorman 2 had another newscaster battle; but this time it was even more over-the-top, with characters played by the likes of Will Smith, Kanye West, Liam Neeson, and Jim Carrey. There are a lot of great and interesting cameos in this sequence if you’re willing to look for them (some of them aren’t so obvious).

The story does take some dark turns as well. For example, Ron Burgundy temporarily goes blind due to an ice skating accident mostly caused by rival newscaster Jack Lime (played by James Marsden) and Burgundy’s massive ego. This is a shocking and strange turn of events that causes Burgundy to get in touch with his sensitive side and make amends with Veronica. He “raises a shark” in the process too.

So, in short, it has its quirks, and it has its predictable moments. However, all in all, Anchorman 2 should be praised for being a great sequel; a feat so few sequels accomplish.