What? Why are you looking at me like that?

Yes, I ended up creating yet another drawing of Mai Shiranui (maybe I’m a little obsessed after all). I don’t think it will be the last, either. However, this time, I actually drew her torso as well. Good on me! I don’t think the proportions are quite right (her head seems a little big to me), but I think it turned out okay. If I could fix it, I probably would.

It seems like I have been having some issues with proportions lately. Admittedly, it has been a while since I’ve drawn this much. I also used to draw male heroes a lot as a kid (not the superhero kind; mostly of the Dragon Ball or Yu Yu Hakusho variety), so I didn’t draw that many women. In other words, it’s still kind of new to me. Had art remained as my primary passion in high school, I probably would have more experience in this area.

I’m sure I will eventually figure out my process. Sometimes when drawing Anime, manga or video game women (or men, for that matter), the standard rules of human proportions don’t really apply. To a degree, that is also true here (to say nothing of Mai’s often “exaggerated” proportions).

Regardless, I hope you’ve been enjoying my creations. There is definitely more to come! 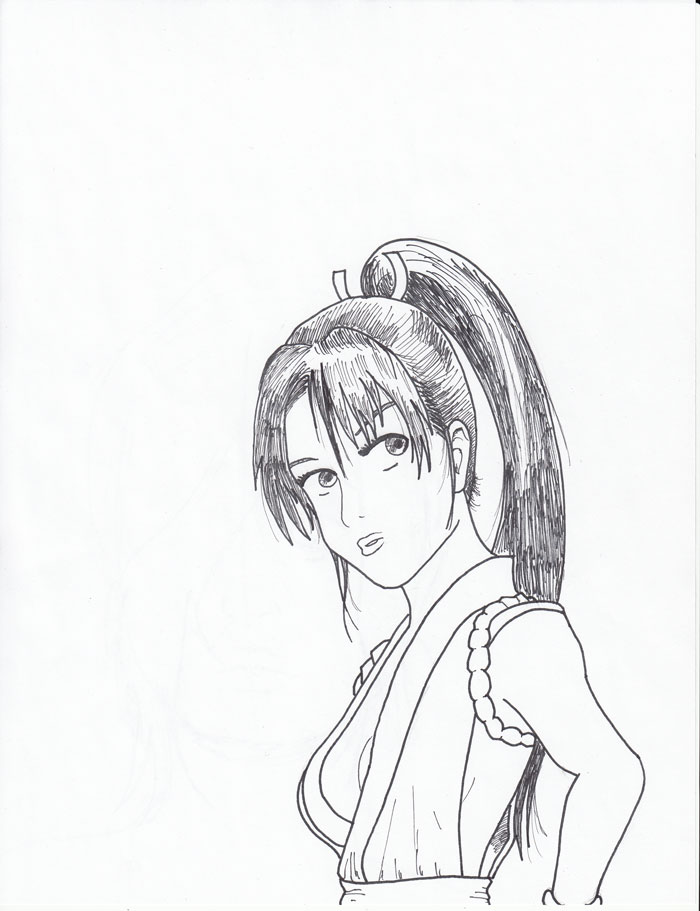 I did not feel that Final Fantasy VIII was the strongest installment in the series. I do like some of the characters (or at least their design), but the game itself was a bit of a mess. There were far too many tutorials early on, and they were confusing to say the least. The storyline is also full of irreconcilable plot holes. There have been some interesting theories about that, but I don’t think there’s enough evidence to support the idea that the developers were clever enough to have thought it through to that extent.

I don’t know why, but Selphie seemed like the obvious choice for my first Final Fantasy character art. She’s spunky, fun and girlish. She has a certain innocence that hasn’t been spoiled by a difficult and turbulent world.

My Selphie turned out looking a bit mischievous. Perhaps this is the look she would give Squall when she sensed the blossoming of a romance between him and Rinoa. Or, maybe, she’s about to pull a prank on Zell.

Though I did use the original character design as reference, I still made it my own. I approached the illustration in my own way. Quality wise, I like this drawing more than my Mai Shiranui drawing. 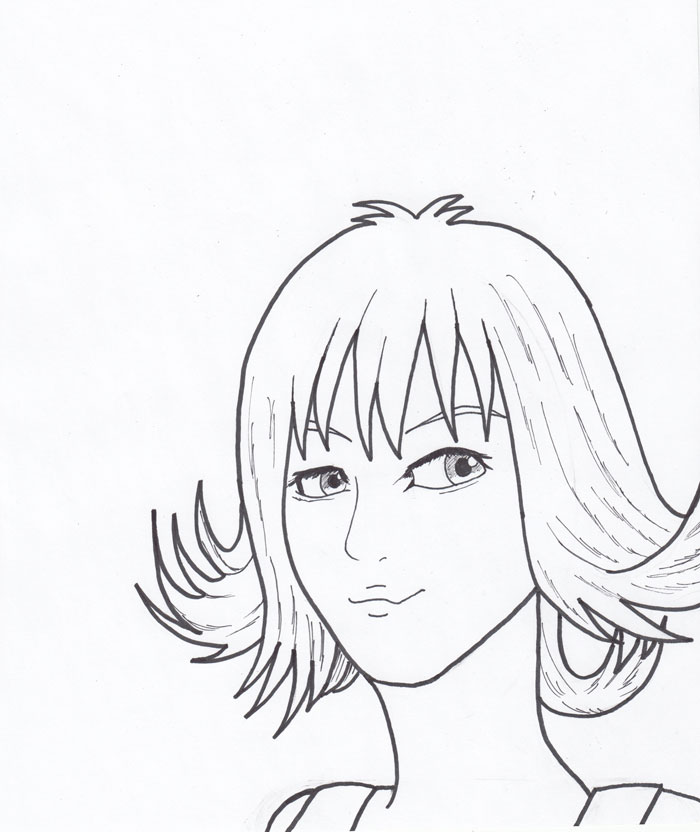 This is my second attempt at drawing Mai Shiranui. Where my previous Mai was confident and assured looking, this Mai is decidedly happy and peppy looking.

This time, I tried to draw her in my own way. I still used reference material, but my goal was to draw her the way I would as opposed to mimicking someone else’s style. Drawing what someone else has already drawn is easy; being able to incorporate it into your own repertoire is more challenging. As for the finished product, I don’t think it’s perfect, but I think I am starting to find my flow and my style.

The bolder outline (or line art) was something I wanted to try, and I ended up liking it. I will likely continue to experiment with it. I also like the way the texturing of the hair turned out. Again, it’s not perfect, but I think it’s a pretty good effect.

Surprisingly, I am finding that I am able to do these drawings progressively quicker. I always thought character drawings would take a lot of effort, but it’s not as bad as I would have thought. We’ll see about full body illustrations though; that might be a whole different game. 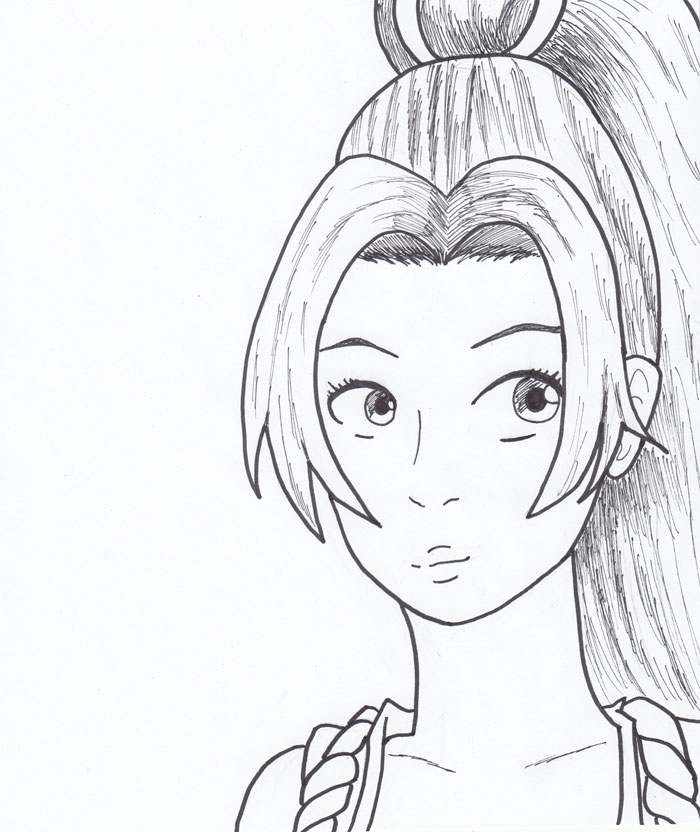 I believe I was in grade four when I first became aware of Garou Densestsu. I was already partial to fighting games, having been exposed to Street Fighter II years earlier.

How ever similar, Garou Densetsu did bring its own flare and style to the genre. Ultimately, though the series sort of got swallowed up by The King of Fighters, I think I ended up liking Garou Densetsu more than Street Fighter. The characters were unique and memorable, and I really liked the special moves of characters like Terry, Andy and Kim Kaphwan as well.

Of course, one character that a young, impressionable boy wasn’t likely to forget was the scantily clad, colorful female Ninja in the form of Mai Shiranui. Fighting games had certainly used females in this manner before, but it wasn’t long after the emergence of Mai that the sexualization of fighting games became all the more extreme.

That’s a bit of a heavy subject and might be a good topic for another time. Regardless, with my ongoing sketching habits, I decided that I wanted to challenge myself. I can draw just about anything, but with a lot of my early work as an artist (I practically started drawing and painting out of the womb), it became pretty apparent that there was an utter lack of female drawings. Every boy goes through a period where he is obsessed with heroes, and that’s what my work portrayed most of the time.

Anyway, I decided to keep my Mai drawing here just to her head and shoulders. I will probably do more full body sketches in the future, but I don’t really see myself drawing a scantily clad woman merely for the sake of tantalization. 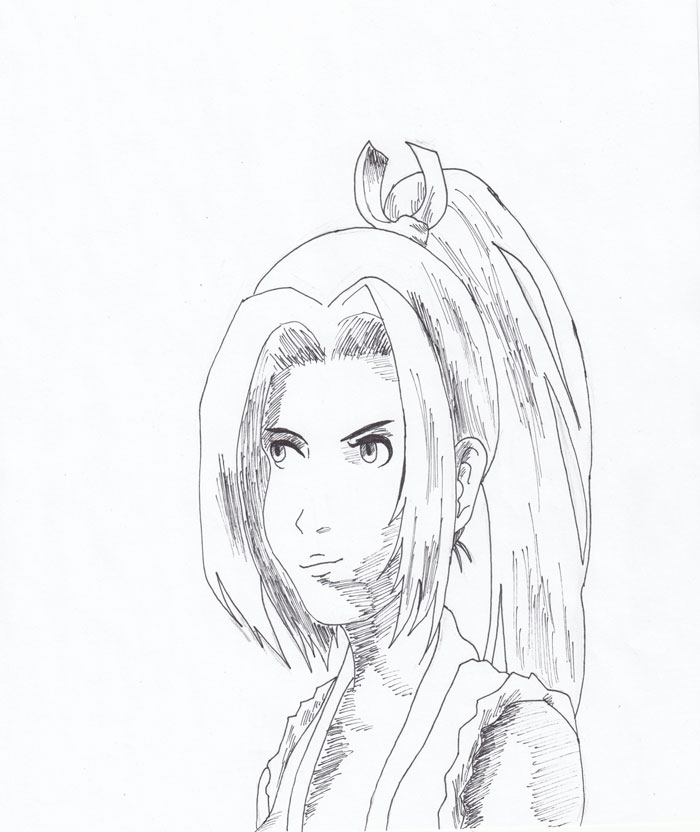 I can’t say that I am, or that I have ever been in the habit of creating fan art. I have certainly done character studies in the past, but as an artist I’ve always been more about developing my own style and characters and worlds than trying to emulate someone else’s work. Having said that, finding your own style is often a process of amalgamating a variety of different styles.

Moreover, sketching and drawing is something that helps me to decompress and collect my thoughts. It’s something that I’ve been doing a lot more lately, especially if I get stuck on a problem or if I’m just not sure how to proceed with a project. It also stops me from engaging in other time-wasting activities. Drawing just feels a lot more productive.

Truthfully, it has been a while since I’ve just drawn for the heck of it. I tend to create projects intentionally and deliberately, which means that I often equate them with real work. I think it’s probably healthy to have a side hobby that I’m not depending upon to help me move my career forward.

For some reason, the first thing I decided to draw was Dragon Ball’s Bulma. I guess that makes sense, because I grew up having a lot of respect for Toriyama’s work.

Since Bulma is in plenty of games and movies, I thought this would make for some relevant and interesting content for the site.

Let me know if you enjoyed this piece; perhaps I will post more in the future. 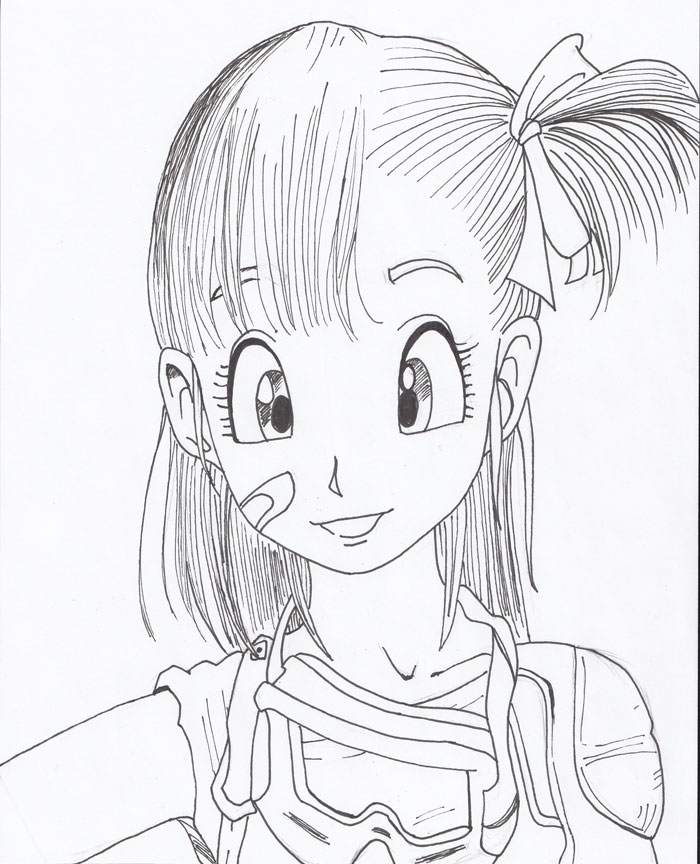