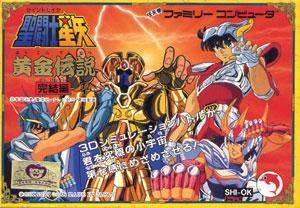 Tedious, redundant, and ruthlessly difficult at times, this game is considered by many to be both incomplete and… Well… Crappy.

Saint Seiya: Ougon Densetsu was developed by Akushizu Art Amuse and published by Bandai for the Famicom. It was dumped upon the Japanese world on August 10, 1987 and also saw a release in France. This RPG style game was based on the popular manga and anime series Saint Seiya. The game never saw a release in North America. That’s probably for the better.

The game does boast a surprising amount of content for an early Famicom game. They did a good job of incorporating characters from the original manga series, even some who only appeared in the anime series. The combat animation was also relatively good for its time. Even popular RPG games that came after Ougon Densetsu didn’t feature the type of animation that this game did. And, while movie and graphic novel related games sometimes leave something to be desired, this game did a decently good job of adhering to the storyline.

However, there were definitely more problems with this game than there were merits. Ougon Densetsu, to a large degree, revolves around the depletion and restoration of the player’s power, also known as Cosmos. However, this system tends to be fairly unbalanced. At times it is entirely too easy to refresh your supply of Cosmos, and at other times it is too limited. Almost every enemy in game will deplete your supply of Cosmos, and while you are supposed to be able to replenish your supply at the hospital, it’s entirely arbitrary as to when they will actually let you in. The manual is pretty ambiguous on this subject as well. This means that you have to avoid encounters with enemies a lot of the time.

Combat is also a bit of an issue, whether in the side-scrolling setting, or the RPG setting. When you’re fighting enemies in the side-scrolling environment, Seiya’s reach is a little too short, and no matter how much you level up you still tend to take the same amount of damage from the enemy’s attacks. In the RPG style battles, the player isn’t given many choices of what to do. Basically, you can punch or kick and that’s about it.

The storyline is also a bit of a mess. Many events take place without any prompting. Team members join at random intervals. Seiya’s armor gets repaired, but there is never any mention of it being broken. Faithful readers of the manga series know this story well, so it’s a bit jarring to say the least. Because the game was being developed when the twelve palace campaign was still being written, the game ends prematurely and suddenly in the middle of the campaign. Moreover, there isn’t really much point in having other members of the team as they tend to be much weaker than Seiya.

Anyway, I’ve talked enough about this, haven’t I? Watch this video if you really want to see how tedious this game can get: