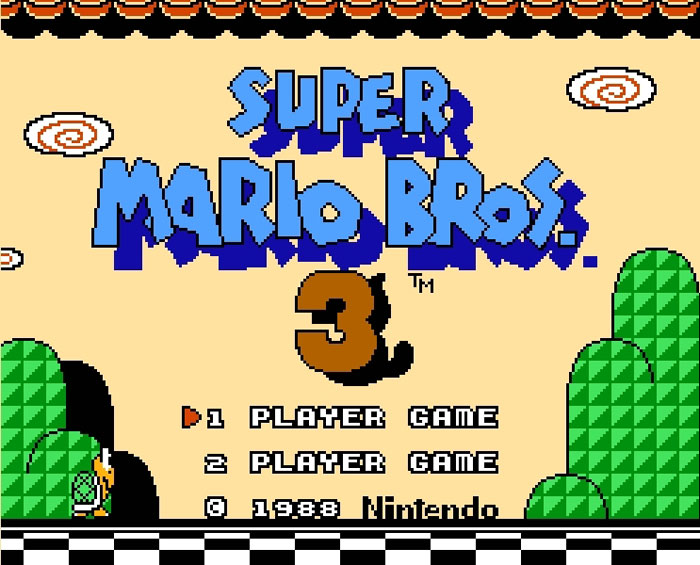 Power Button. Flash. A red curtain scrolls up. What looks to be cardboard cacti bolted onto some sort of stage set come into view followed by a moustachioed plumber and his younger brother–and they just…PICKED UP A TURTLE SHELL? WHOA! AND NOW HE HAS A RACCOON TAIL?! WHAT?! This is how Super Mario Bros 3. starts, continues, and finishes. Without any theme music or sounds, and without warning, it shows that it is not the same game as its predecessors, the passing familiarity only there to make you feel comfortable so it can surprise you, over and over again.

It may be entirely pointless to write a review for a game that no longer needs introduction, but with such fond memories of “Mario 3” as a child, I feel like this is more love letter than critique. If you’re looking to simply decide whether or not you should buy this game in one of its many available formats, I will summarize this hug-a-thon now in one word–yes. 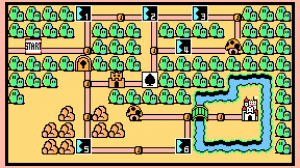 When you finally pick your jaw up off the floor at the mini-cartoon you’ve just watched, and press start (coin noise!), the game shocks again. It’s a map. A map of Mario’s world! There are castles, and some weird spade thing, and there’s things… moving things on the map! Your desire to find out just what everything on the map is and what it does and where it goes is what drives you to move over from the START square you’re on, to the {1 square and press A.

So colourful. That was what I remember thinking when I first played World 1, Level 1 all those years ago. Immediately apparent to anyone whose previous experience with Mario are the first two Super Mario Bros. games, is that this game looks much prettier, and somehow also looks more fun. Still, you acclimate yourself to the controls and find they’re about the same so far as the first game, and so you begin to run and jump, controls as tight as ever, hitting that first question box, which is probably a mushroom! (mushroom grow noise!)

Mario’s new run is as peppy and jovial as his new, smiling face. You can’t help but grin along with him either as you hit that next ? block. Probably a coin right? Nope! Surprise! Touch that leaf! (poof noise!) 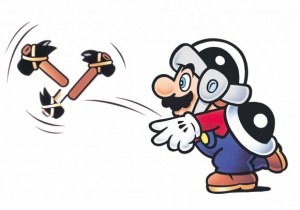 Super Mario Bros. 3 introduced the concept of multiple suits, a series staple even as of the latest entry on the Wii U. The suits offer different abilities, which allows players to tackle situations in a bunch of different ways. This first one, the Raccoon Suit, gives you a satisfying (thunk noise!) tail whip attack, but more importantly, gives you a new defensive strategy– run fast enough, and you can take off and fly. Suddenly those big gaps and scary piranha plants don’t seem so impossible anymore.

If you discover that Raccoon Mario can fly right away, another facet of this game comes to light– there’s a whole secret world of secret things right above your head! The game has a completely optional, but incredibly fulfilling focus on exploration, that, save for warp zones, wasn’t in the previous Mario games. In fact, assuming I haven’t got my wires crossed, very few NES action games up to this point felt so vast in scope, save for maybe Metroid. There are things to find in almost every level. Much like in its presentation and pacing, the level design of Super Mario Bros 3 is built on one word–surprise.

So this is a bit of a sidestep, but it’s worth mentioning a school yard memory here. Due to the game’s vast cache of secrets, this was a game where every kid who played it knew a kid three doors down whose cousin found “a secret turtle suit” or a “secret world 9”. But one story (stepping back into focus!) was true– the whistles.

There are three warp whistles in this game. Made in a time where there wasn’t an internet to consult, and all game tips and tricks came from very expensive (for a six year old) guide books, no one knows who first discovered the whistles. Nothing shows you how to get the whistles. Nothing. These three items are mythical and legendary until you accidentally stumble upon them, entirely by following your own impulses.

“Oh I feel like flying through this whole castle cause it’s faster and whoa!” “Ugh this hammer thing sucks because it doesn’t do anything and OH yeah it totally does!” This is Nintendo’s own brand of grassroots, learn-as-you-go gaming at its peak.

I would love to, and very much could, go into detail about all of the levels in this game. But there are 90 of them, and besides, why would I want to spoil everything in writing? Quickly however–every single world has its own distinct and exciting new theme. There’s the desert world with its crazy sun, the water world’s never ending map and frog suit, giant world with its colossal enemies, the sky world that is actually two worlds, a world of ice, a world of pipes, and a world of battleships and darkness. If you dreamed about a Mario game when you were a kid, these are your dreams come true.

This is Super Mario Brothers 3. Surprise!