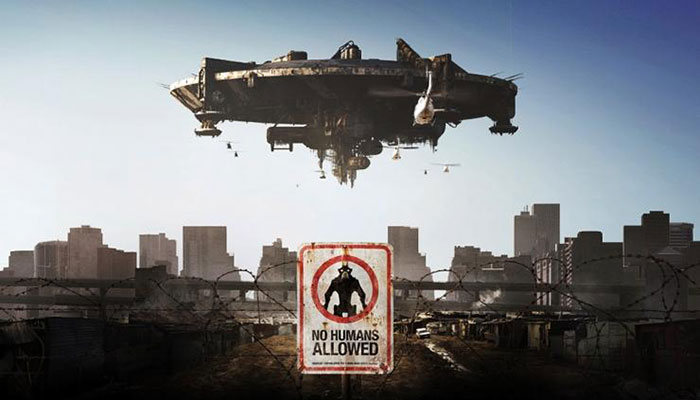 I’m just getting around to reviewing this 2009 Action Sci-Fi here in 2015. That’s probably worthy of an explanation, so I will attempt to share what happened.

I’d heard a lot about this movie, and I figured I should see it at some point. It wasn’t at the top of my list of priorities, but I knew I would eventually get around to it.

As it turns out, I’ve actually had the DVD in my possession for a couple of years now. To make a long story short, I traded an amplifier for a guitar. Then, I put the guitar up for sale. I found a buyer who wanted to give me a couple hundred dollars, plus several hundred DVDs in exchange for the guitar.

I knew that DVDs were beginning to lose their value, but the trade seemed fair, and I had no intention of hanging onto the guitar, so I agreed to the terms.

That’s how I wound up with a miscellany of several hundred DVDs, many of which I sold and gave away almost immediately. I wasn’t interested in watching every movie, and I could see that the previous owner wasn’t exactly a man of taste (there might be a reason why he was getting rid of those movies). Fortunately, I already had an Amazon seller account, so selling some of the titles proved relatively easy.

I suppose I could have held onto more strictly for the purpose of reviewing those movies, but even a reviewer like me – who has a history of talking about crappy movies – can only tolerate so much crap.

My timing was good in the sense that, had I waited no more than six months to a year from the time I sold my guitar, I probably couldn’t have sold those DVDs at all. Again, they have very little or no value now. People aren’t terribly interested in owning physical media, or even storing a large number of files on their computers anymore.

Do you like music? Great, you can stream it. Movies? You can stream them too. Most forms of entertainment are now headed that way.

My standpoint on physical and digital media is somewhere in between. I don’t necessarily see a reason to collect and hoard, but I don’t think physical goods are completely without merit either. For example, though I do own an eReader, I still like owning physical books.

Truthfully, I find that one isn’t really better than the other. Sure, you can store a lot more books on an eReader, so it’s a great storage device, but you can’t highlight and underline certain sections, write notes in the margins, and so on. You can’t make your book your book, if you know what I mean.

I’m not saying that eReaders don’t have superior functionality, and yes, you can “highlight” and take notes, but it’s not quite the same. I can’t very well open to the exact page I was reading and spontaneously show someone on an eReader. I can’t immediately go back to that page for reference if I want to.

While that is just one example of the differences between digital and physical media, my thoughts across the spectrum are essentially the same. They both have advantages and disadvantages to varying degrees.

Anyway, turning my attention back to the subject of this article, I finally got around to watching District 9 recently. I know it’s been out for a while (and it’s also been in my possession for a while), and I know that I’m definitely not the first to publish a review, but maybe that’ll actually help in this instance.

After all, I haven’t read any other reviews, nor have I really listened to what other people have said about this movie. I went into it with a relatively positive impression, but not so saturated and sponged in other people’s opinions that I might miss forming personal thoughts and impressions on the subject.

So let’s get into this review. First, I’m going to take some time to talk about the setup.