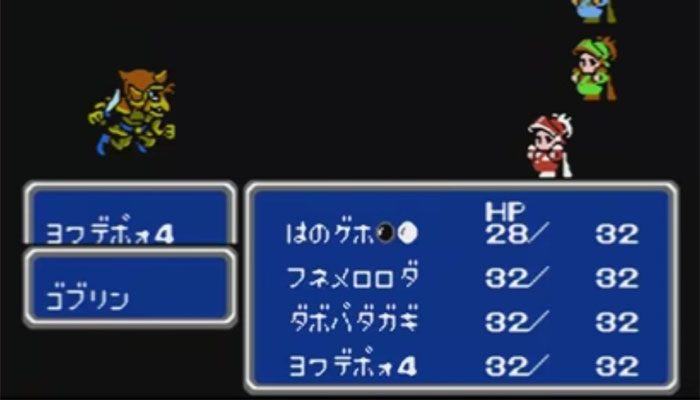 Say what you will about Final Fantasy games. Sure, the series has been taking a beating by various critics in recent years, but it started out as an honest-to-god entertaining and endearing RPG series.

The “Golden Years” may be long gone, and who knows if they will ever be recovered, but at least we will always remember the series for those moments of brilliance, which were not few and far between in the earlier years.

When I was five years old, my family moved to Japan. My exposure to video games came at an early age, and I was immediately hooked. I grew up playing games like Final Fantasy VI and VII as well as Dragon Quest V and VI. However, I wasn’t always an RPG fan.

I was over at a friend’s place playing Super Famicom one day, and I found myself getting progressively bored of the games I was playing (I don’t remember exactly what he had besides Cho Makaimura… that game freaked me out as a kid). On a whim I popped Dragon Quest V into the system and took it on a test drive (DQV only had three save blocks; I may have deleted one of my friend’s to start a new game… oops).

As it turns out, the game was pretty engaging. It probably helped that I had developed my Japanese skills to the point where I could actually understand what the dialogue meant, but it got me thinking. “Maybe RPGs aren’t so bad after all. At the very least, Dragon Quest V isn’t.”

Thus began my obsession with RPGs. I borrowed Dragon Quest V from a friend and kept playing until my main party members were all over level 80 (that’s an excessive amount of grinding in case you were wondering). I had to return the game of course, but I eventually bought a copy for myself and played it all over again.

I will tell the full story of my experience with DQV another time, but in short because of my love of DQV I started getting into previous games in the series, which also turned out to be very good (I had thought I only liked V because it was the first DQ game on the Super Famicom; I was wrong). This would also lead me to explore the world of Final Fantasy games.

I don’t consider myself exclusively a nostalgic gamer, and I have played several modern RPGs. That being said, there still is a certain charm about games that came before the 3D era. If the rise of throwback independent games like VVVVVV is any indication, I’m clearly not the only one that feels this way.

So long story long, I was well-prepped to be the target market for Breath of Death VII. I was cruising through the Steam store one day trying to find an affordable game that I could get in to. That’s when I came across BODVII. They had me at the trailer. I didn’t need to see anything more. This game was for ME.

The game esthetics reminded me of the early Japanese RGPs I grew up with and loved so much. If anything, BODVII looks and feels a bit like a combination between Dragon Quest IV and V. The developers were obviously influenced heavily by the Dragon Quest series.

Breath of Death VII does feature some modern elements, however. The music clearly utilizes more modern technology than the bleeps and bloops available in the Dragon Quest days. The speed of the game is not hindered by the processing power of a retro game console either. Other than that, however, the game by and large has a retro RPG feel.

The combat system is very similar to DQIV. DQV actually featured improved graphics over the Famicom series of DQ games, with graphical representations of magic spells and various attack maneuvers. BODVII is more on the primitive side, and there really is no graphical representation for anything besides the enemies and the number indicators for HP and MP of each party member. Button mashing will actually cause the combat to go by very fast, which is a feature I appreciated a lot.

I don’t want to get too sidetracked here, but I do recall Dragon Quest VII (the first DQ game to appear on the PlayStation console), where the flow of the game was brought to a grinding halt because of the sluggishness of combat, transition time between cities and the outdoor world (and vice versa), and slow-moving heroes. They had gone to the trouble of correcting this issue in the wonderful Super Famicom remake of Dragon Quest III, so I’m still puzzled as to why they wouldn’t give VII the same treatment.

Breath of Death VII does not suffer from this problem at all. Combat is fast (well, about as fast or as slow as you want it to go), transportation is fast, and you can also move the dialogue along at your own pace. For me, this was a definite plus.

Of course, if you’re looking for a 40 hours plus epic RPG, then BODVII is not for you. The main storyline could be completed in one or two sittings (5 or 6 hours) if you were determined to do it. There is a bit of grinding to do along the way, but nothing too severe. Some boss battles do require strategy as well, but again no mind puzzlers. There is some bonus content, but all in all it’s an RPG that can be completed rather quickly. I suppose there are some games from the past that could be completed just as quick if they didn’t suffer from some of the aforementioned problems.

If there is one complaint I have about the combat system it’s that you spend most of your time harping on your best abilities to kill the enemies (or at least I did). Some of the late-game encounters tend to take you out pretty quickly if you give them too much room. However, as long as you keep spamming your best spells and skills you tend to come out okay. Even if some of your party members die or are wounded, their HP is replenished after each battle. Although using your skills does deplete your MP rather speedily, it’s rarely an issue with the frequency of save points that refill your MP.

In conclusion, one of the great aspects of this game is that it doesn’t take itself too seriously. The developers clearly knew that they didn’t have a story-centric epic on their hands, and decided to swing the other way. The humor is prevalent throughout the game, especially as the characters chat among each other. In short, it’s sort of the Parodius of RPGs, spoofing the genre while still paying sufficient homage to it. 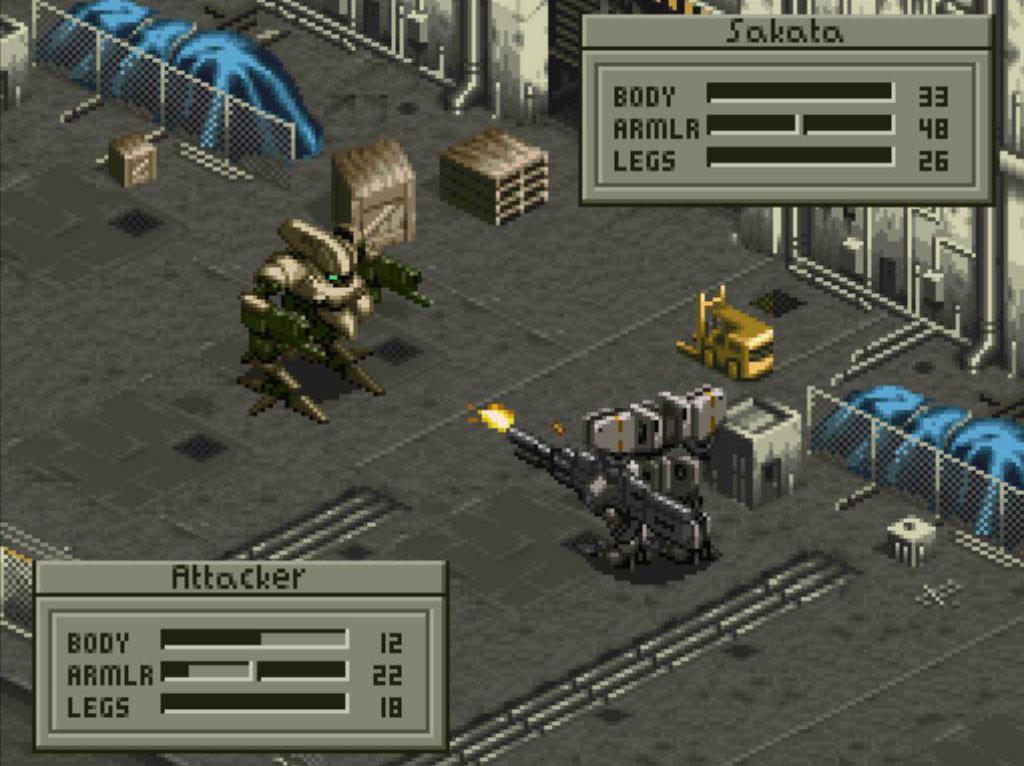 It’s been a very long time since I last played this game. I remember that I finished it in grade school, and was totally absorbed by it. Until I picked it up again recently, I had forgotten how hard it was. If I didn’t have a guidebook, I don’t think it would have been possible for me to finish it.

Now that I’m playing it again, I’m not sure if “fun” is really the word I would use to describe it. It’s really more “addicting” than it is “fun”. You want to get to the next city so you can upgrade your Wanzers and test them out on the battlefield, an endless cycle that continues with each level. Early game, however, it seems like you’re barely scraping by. You don’t always have enough money to upgrade your machines, despite the fact that you need some of the best gear available to triumph, even in early missions.

I like the unique look and feel of the game. Without a doubt it’s a SquareSoft game, but quite different from anything in the Final Fantasy series. That isn’t to say it isn’t without its similarities (like the music), but it holds its own atmosphere and aesthetic.

I’m finding the storyline a little weak this time through, but it seems like gameplay was the main focus in the creation of this game, as opposed to plot.

I wasn’t really sure what to expect when I first saw Final Fantasy XII. It almost seemed like a mix between Lord of the Rings and Star Wars when I saw the opening sequence. One of the things that struck me immediately was the new combat system. Obviously there are usually some systemic differences from one Final Fantasy to the next, with XII they finally did away with turn-based combat.

As it turns out, I rather like it. There are some obvious flaws with combat, because you can automate most of it, but I liked the idea of having all the monsters visible on the map instead of random encounters at various intervals.

I found the storyline impossibly difficult to follow (perhaps a bit on the boring side), but maybe that’s just me. The world is huge, and I do like that. In some ways it can be tedious and confusing trying to figure out where you need to go and what you need to do next, but obviously they put some thought into the design, because there are certain ‘shortcuts’, even when you’re getting around the various cities.

This isn’t really an official review, since I haven’t actually finished the game yet. I’ve put in about 30 – 40 hours of gameplay, and even though I was still enjoying it, I stopped playing it altogether for some reason. I don’t know why I do this sometimes, but I don’t always have the endurance or determination to finish a game all the way through. It’s actually been a long time since I’ve played it, but who knows? I might pick it up again (spoiler alert: I do pick it up again, and complain about it endlessly).