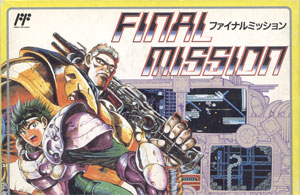 Are you ready for a challenge?

Final Mission (a.k.a. S.C.A.T. Special Cybernetic Attack Team) is a side-scrolling shooter developed by Natsume and was released in 1990 in Japan (1991 in the United States).

This shooter closely resembles Contra in many respects. The heroes look similar, the weapon upgrades are similar, even the sound effects are similar. The main difference is that the heroes use jetpacks to float around the level, and have orbital cannons. These cannons circle around the heroes as they move around, but they can also be locked in place in order to target enemies in harder-to-reach areas (i.e. top or bottom of the screen).

The hero only has three bars of health to begin with – although you gain another bar of health every 10,000 points – once you’ve been hit three times the game is over. I would suspect that the average player wouldn’t be able to beat the first level on their first six tries, so that’s some indication of how difficult it is. Stage 4 and 5 are particularly difficult, with laser beam cannons, indestructible ships that take up 3/8 of the screen, and enemies that scatter multiple bullets across the screen.

On the up side, there are only 5 stages and 5 bosses in the entire game (although there are some mid-level encounters as well). This makes it a relatively short game. On the one hand, such a difficult game shouldn’t go on any longer than that, but on the other hand, it’s just lazy. I mean, why not have 12 stages that gradually increase in difficulty rather than 5 stages that weed out all but the serious gamers. I kind of saw it as a personal challenge, so I went ahead and beat the stupid game (though not without the help of an emulator).

Okay, I do have to admit this is a pretty fun game. It’s a bit of a button masher, because one button is used to fire and the other to lock your orbital cannons, so really you’re only using one button 95% of the time. The overall difficulty is a bit ridiculous, and I still think it would have been better with more stages.

Not very good. Again, slight differences here in the American release vs. the Japanese release, but the original game’s graphics aren’t good even by NES standards. Backgrounds are primitive, and the heroes and enemies look even worse. The gameplay certainly matters more to me than the graphics, but it does seem a little lazy, like other aspects of the game.

All the sound effects could very well be direct rip-offs of Contra and I would be none the wiser. However, I liked the Contra sound effects so that’s not saying much. The music was anything but memorable. It was kind of just there. The only thing that could redeem a game like this is really intense music, but again there was nothing overly memorable there.

Okay, so it probably sounds like I didn’t really like this game. Don’t get me wrong, it’s a fun shooter if you have a lot of patience and time to kill. It has its moments, but there are definitely better games out there. The reason I couldn’t give it less than a 5 is because it’s actually a fully developed (well, sort of), functional game. I don’t think I would play it again now that I’ve finished it, but maybe I would try the 2 player co-op mode. Check it out for yourself!

This video demonstrates some of the differences between the Japanese version and North American version: 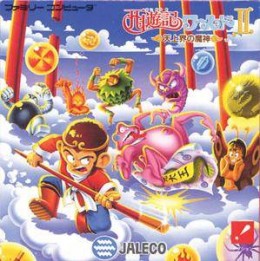 I much prefer the Japanese cover art to the North American… As is usually the case.

Saiyuuki World 2 Tenjoukai No Majin (aka Whomp ‘Em) is basically a game in the style of Mega Man. It was developed and published by Jaleco on December 7, 1990 in Japan and March 1991 in North America.

There are 6 main stages in Majin, each containing a boss from whom you gain abilities when you beat them. Of course, certain abilities are more effective against certain bosses, but some abilities aren’t made for attacking at all. The main difference from Mega Man is that Goku (the character you control, not to be confused with the protagonist from Dragon Ball) doesn’t have a projectile weapon. Instead, he has a Nyoibo (aka power pole).

The game is comprised of 8 levels in total and 7 bosses. The first stage is merely an introduction, and the final stage – as you would expect – leads to the last boss. It almost feels as though they went deliberately out of their way to make this game difficult because in-game content is sparse.

I remember playing this game as a kid, and even though I was able to reach the final stage, I was never able to finish it. One of the reasons for this is that frankly it’s a very difficult game. The stages are relatively short, but the bosses get more difficult as you go. It appears that the bosses gain more health as you gain more health, and they can steal your Kintans (basically the equivalent of an energy tank) as well. You can only hold up to 3 Kintans at any given time, so you have to keep an eye on your health.

You start with 4 health bars (hearts) in-game, and you can gain up to 12 by collecting gourds (now there’s a word I never thought I would use). Collecting gourds (aka Hyoutan) can prove very time-consuming, but you’ll want to get at least 10 hearts by the end of the game (if you intend to finish it). It takes 99 gourds to get your final heart, but I never made it that far.

Even if you make it to the final stage, you’re probably all out of Kintans (which doesn’t bid well for you), and to add insult to injury, you can drop back to the base level from the second level of the stage. Fortunately, you can keep killing enemies in the stage and wait for them to drop Kintans. To beat this stage, you have to take advantage of all the abilities you’ve gained, including the Kintoun (flying cloud you can ride on aka Flying Nimbus).

After you beat the initial 6 bosses, you gain an additional ability which is basically a dragon shot. This is the only weapon that seems to be effective against the final boss (a disgruntled Buddha?). The only catch is that this ability eats away at your health, so you have to be careful. The disgruntled Buddha starts by summoning a few minions before he starts attacking you. As long as you have 3 Kintans, close to full health (at least 10 hearts), and take advantage of your dragon shot, you should be able to beat him.

The controls are simple and well thought out. Goku is able to pull off a surprising variety of moves, but it doesn’t take a rocket scientist to figure it out.

Fairly average for a Famicom game. The backgrounds certainly aren’t as well-developed as the Mega Man games (3 and onwards).

The music is quirky, creepy, and fairly repetitive. A lot of it has Oriental undertones to it, which seems to work for the game. The music has a way of sticking in your brain after you’ve spent a lot of time collecting gourds in a particular level, but that isn’t necessarily a good thing.

All in all it was a pretty fun game. It’s definitely not up there with Mega Man or Super Mario Bros. in my mind, but it still provided some entertainment. If you’re up for a challenge, then you might want to try it out.