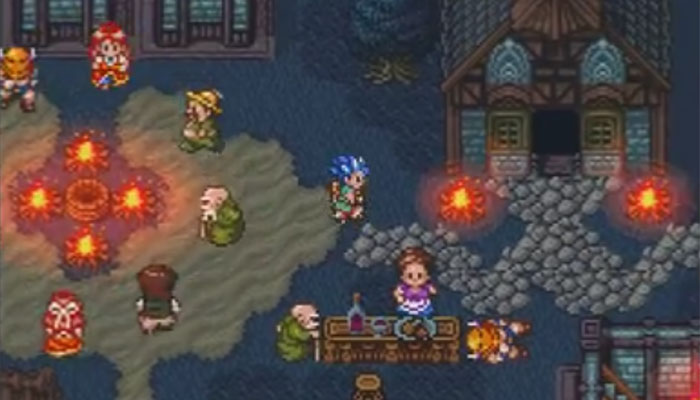 This is secretly the best Dragon Quest game in the series. Don’t get me wrong; I loved III, IV, and V. In fact, if it wasn’t for V, I wouldn’t be a fan of the series at all, let alone RPGs. VII took a rather awkward turn, though VIII was also quite good.

What makes VI the best is the storyline. I’ll go into detail as to what they did right and what they got wrong in a moment – and there is a lot to talk about – but really think about this for a second.

The protagonists of this story begin their journey in the real world. Then, they go to the dream world, where they don’t possess physical bodies, and they have to find them to merge with them. Then, you go back and forth between the real world and the dream world, revealing buildings and unlocking treasures that were sealed away by the enemy because of the power they could offer willing heroes. Finally, you go to the “in-between” world to defeat the enemy.

This is a story for a video game!? Yes, it is, and Dragon Quest VI carries a powerful message with it.

What they did right: so much that people tend to overlook. As with most RPGs from the time, there was some fetch questing, and there was some grinding. The menu system also stayed true to the Dragon Quest series, and wasn’t anything groundbreaking. However, from a holistic perspective, the storyline was incredible, the graphics were colorful and appealing, the combat system – while still rudimentary – was a significant improvement over previous games in the series, and the music was also sublime. The class system was essentially a throwback to Dragon Quest III, but since III, IV and V got so much right, it wasn’t a bad decision to bring it back for VI.

What they got wrong: the game balance is a little out of whack. With RPGs, It’s hard enough to achieve the perfect balance of difficulty and challenge with in-game battles, and for the most part, Dragon Quest VI hits it right on the money. Where it starts to go askew is when you gain the ability to change classes at the shrine of Alltrades. As a character begins to master classes, especially the higher classes, they also learn progressively more powerful abilities. When you consider the fact that your entire party can learn all of these abilities, you can see how quickly your team can become overpowered over time. However, the bonus dungeon is challenging enough that you’ll need every advantage you can gain. The other thing that was disappointing – at least for me – was the lack of monsters to catch. Ultimately, it doesn’t play as big of a role in this game as it does in Dragon Quest V, but one of the joys in V was the ability to assimilate a variety of enemy monsters into your party. In VI, not only does someone in your party have to be the Monster Master class in order to capture monsters, the number of monsters you can assimilate is significantly lower than it was in V. A little disappointing, but it definitely didn’t make a difference in terms of overall balance. There were greater incentives to catching more monsters in V than in VI.