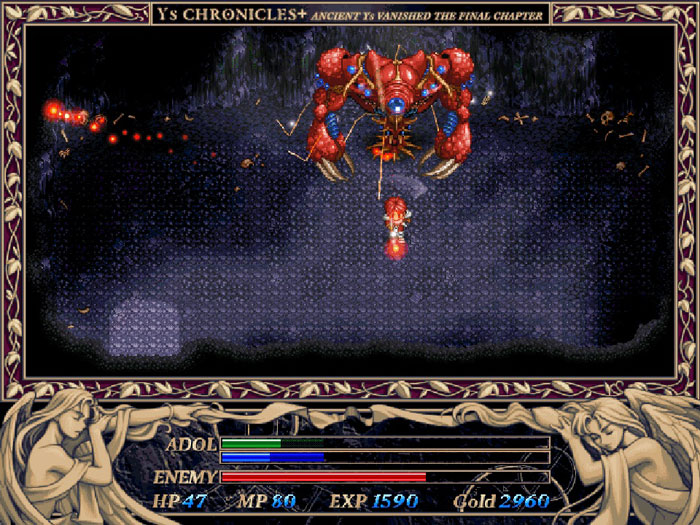 The visuals really sell this game.

I made mention of the fact that I played Ys I & II Chronicles last summer. I captured some video, made mental notes, and even gave considerable thought to how I wanted to review this game. However, I have been keeping busy, and I haven’t gotten around to putting it all together in a cohesive way.

But then a time comes when you simply say, just write the damn review.

I still remember the commercial for Y’s III Wanderers from Ys. The game would be seeing a release on the Super Famicom system, and the commercial made it look so exciting that I wanted to go out and buy it on the spot.

But you know what being a kid is like. I’d have to save my allowance on order to purchase another game. Not only that, but it would just be one item on my ever growing list of games, comic books and sports equipment that I so desperately wanted to buy.

So I never got around to it. My family moved back to Canada in 1997, and though I’d never really forgotten about the game, I wasn’t able to obtain a copy before leaving Japan.

One day, something compelled me to check Steam for Ys. That’s when I found Ys I & II Chronicles and immediately decided to purchase it.

Having now played Chronicles, I wouldn’t necessarily say that Ys is the best RPG series ever conceived, but it definitely has its moments.

I was looking forward to playing a classic Action RPG for a change, so when I found out that the player really has very little control over the action. I was not thrilled.

However, over time, it grew on me a little. At times, it makes it all too easy to defeat an enemy, and at other times it makes it really hard. You have to approach combat with some care, because enemies that are stronger than you will take you out in a hurry.

I & II are enhanced remakes of the original two games in the series. Even so, I love the vibrant colors, the cute sprites, the Anime style NPC dialogue screens, the map textures, and the overall smoothness and quickness of control and response.

The story is really nothing out of the ordinary as far as RPGs go. Red-haired Adol Christian is tasked with finding the six Book of Ys in Ys I. He is transported to the floating civilization of Ys II, where he has to solve the secrets of the land and eradicate evil from Esteria.

When taken together, I & II do end up connecting in some interesting ways. However, it doesn’t feel as though there was a ton of forethought. In other words, it comes across a tad forced.

Frankly, it’s not that hard to lose track of where you’re going or what you’re supposed to be doing in Chronicles, especially in Ys I. Like some of the other early RPGs, they don’t exactly spell it out for you.

It’s also interesting that Adol is essentially the only playable character. RPGs often allow you to build a party, but I suppose it would be a little hard to have multiple party members, especially with the action mechanic being what it is.

Though I is enjoyable, II is where it really starts to get good. It’s a little sad that these RPGs are kind of trite; a better storyline would compliment the hard work that clearly went into the development of these games.

With that being said, I would still recommend Chronicles to those who have an affinity for Japanese RPGs. It’s not a complicated game, though it is a little mysterious at times. It’s also a bit of a study in how RPGs have evolved since.